Law School: One Year Down 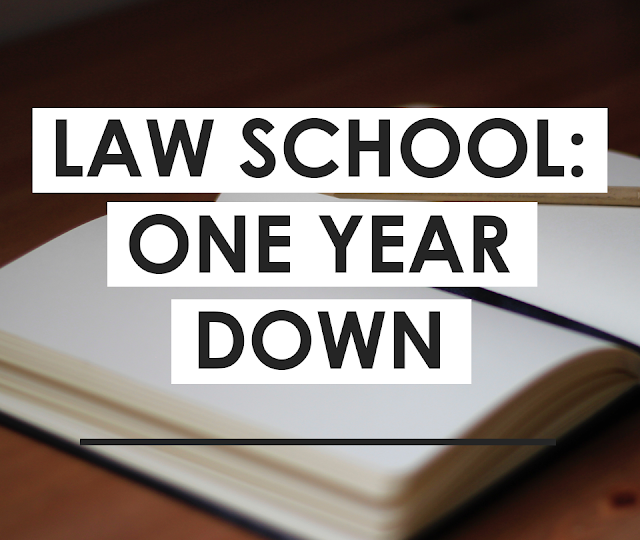 Yes, I am finally done with First Year Law. Well, I guess I can say that I survived. I'm still here and I ain't giving up. Haha!

Actually, mine ended last Tuesday on the 21st when we had our last scheduled final exam for the school year (so much for the finale, Basic Legal Ethics. Hihi). It's just now that I decided to write about it, even though honestly I'm still a bit in shock that one school year came by so fast.

So for this post, I am going to talk about what I learned so far in my first year in Law School and some insights in between.

First thing's first, I was in for a culture shock. Before entering into Law School, I've always thought that Law students have little to no social life because Law School is so demanding, but I was wrong, and I think I already mentioned this before in one of my previous posts. Organizations always found some time to organize events, parties, and whatnot. My schoolmates always found time to socialize after classes. Some schoolmates even found time to travel, even during finals week. So I guess time management plays a big part on this.

Second, everyone gets humiliated in Law School, even the smartest ones. All of us experience the so-called terrors of oral recitations (Hello, Oblicon. Huhu). There is no escape, even if we all studied well. The first time I got humiliated really hurt my pride, but as the days went by, and when I realized that all of us have encountered humiliation in one form or another, I was...relieved. Yes, it was a relief that I'm not the only one. I conditioned myself to think that it's all part of Law School, and it made me feel better.

There are really times when the questions that we get asked aren't from the ones we have mastered or reviewed, which would lead to our predicament, which is why a lot of us think that oral recitations are based on luck. To counter this, I always pray hard before I study, especially during recitation days. From the looks of it, praying really worked for me, and I know it will work on others, too.

But then again, even though we have each of our own struggles, we all have one goal, which is to become lawyers. It's all up to us to strategize on how to reach that goal. We might think that someone else had it easy, but the truth is, all of us are encountering the same stress that Law School brings. Well, of course, having sufficient financial support makes things easier, but we still have to study well so that we don't end up staying in Law School forever and disappointing our parents in the process.

Fourth, it pays to practice being lowkey in Law School, because you'll need it later in life. One teacher always reminded us to be careful about what we post online, especially in social media, because we'll never know what we would become in the future. Due to the advent of technology, it would be easier for bashers, or even employers, to stalk our social media accounts and use against us the things we posted, as what I have said a bit in this post. Even if we delete them, there will be screenshots from those who want to put us down, and that's scary.

Also, this should be kept in mind for ethical concerns. I'm not even sure if I can keep this blog alive when I'll become a lawyer soon because the things I post would be very restricted. There isn't even an abundance of law blogs in the Philippines. Well, there are social media accounts who post relateable memes such as Your Lawyer Says, and blogs which post case digests, but that's just it. It's hard to blog about the law without disclosing things that are inherently needed to be disclosed when we share such, I mean, we can't just blog about the things we encounter in dealings with clients and with the courts because this is unethical. I guess the only way to get away with this is to blog anonymously, but still, we got to be careful with that as well.

Fifth, I know this is a no-brainer, but your handwriting matters. Don't bother entering Law School if your handwriting is bad. Hahaha, I'm kidding! I, myself, have bad handwriting, or at least I think I do. There wasn't any teacher who complained about my handwriting anyway, so I guess mine's okay. Also, not only does your handwriting have to be neat and legible, but also, you have to know how to think and write fast. We are allotted 6 minutes at most to answer each essay question, and that also includes reading the question itself, so we got to be fast with that. It's a challenge to write neatly and legibly and to think fast at the same time, but that's just how it is. I'm not sure if I've already mastered it, but I'm sincerely hoping that my teachers have understood my final exam answers. Haha!

So yes, I'm not sure if this is already a tell-all of what I have learned. I may have missed something, or I may have omitted things for the sake of not disclosing too many details.

Just a side note before I go: regarding my blog revamp game plan, I know that March is almost ending, but I'm hoping that I could really meet my goal and change what needed to be changed on or before the 30th. As you can see though, I already changed my blog header (I hope you liked it. Hihi). As for the blog layout, I'm thinking of not changing it to grid style because as of now, I can't really find an equally beautiful theme like the one I have now with the same functionalities. Well, maybe I did, but I'm not in the mood yet to spend for it. Haha. I just hope I can find a free theme for this.

As for my blogging schedule, my once-a-month plan worked out kinda well, but it didn't really drive consistent traffic. As a result, Adsense called me out for invalid traffic. Huhu. I still don't know how to fix this. I heard about sending an appeal, but I don't think that would work for now because I still couldn't establish a foolproof way to gain consistent traffic.

Oh well, going back, I am hoping for a more insightful school year ahead. I'm glad that I survived my first year in Law School. I just hope that I'll survive the next school years ahead without any failing marks. *fingers crossed*