Batch 2016: My Life after Graduation 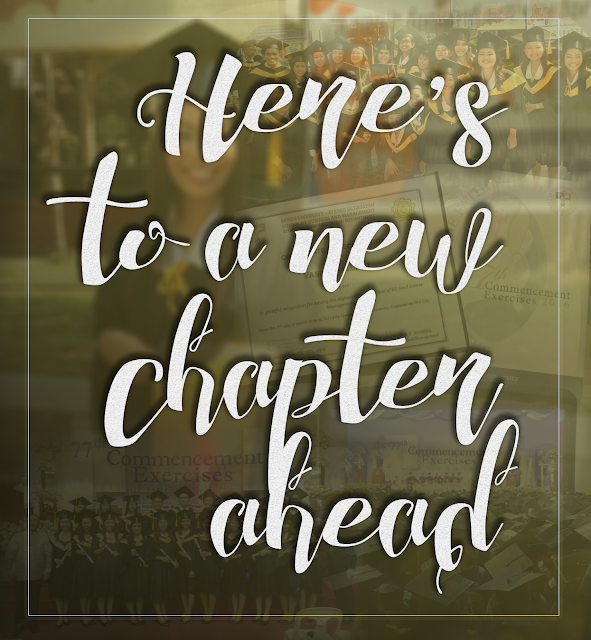 What now? This is the usual question we ask ourselves when we're approaching a new beginning in our lives.

As college graduates, we are off to experience the so-called real world as they say. In our 16 years of studying, we were being prepared for this. We were being equipped for us to have what it takes to compete in this society.

This post has been overdue for more than a week. Well, I was officially a graduate last March 18, 2016. All of my posts regarding graduation had been overdue for a few days or so, and maybe it's because I still have a hard time in trying to sink in everything.

Graduation means goodbye to a lot of things, though it's better to see it as a hello to a new beginning, but let's face it. It's a goodbye to the campus you've stayed for years. It's a goodbye to the people you've met during your stay - the friends that you've been studying with at the library, eating at fastfood chains and restaurants, and having just some pure fun and chitchat with, the teachers that taught you well in terms of lessons of both acads and life, and the admin and staff that you've transacted with for you to meet your requirements.

To tell you honestly, I wasn't really able to say a proper goodbye to all these people because of the fact that I knew I'd be able to meet them again some other time. Aside from that, like what I said previously, I still find it hard to sink in everything, from the fact that I'm done learning everything in the four corners of the classroom for four years, to the fact that I should be off reviewing for the board exams right now and processing my applications for work.

These past few days, I tried finding jobs online, and that's when I realized how difficult it is to find an opportunity to succeed among all other applicants once we get to apply, let alone find a job that suits us. I knew how it felt like to be unemployed, and I'm really hoping that I won't be like that for too long. Since I had a hard time finding jobs, I've made up my mind to just focus on reviewing for the board exams instead for the meantime. Also, I told myself that it would actually be better to be self-employed after all, but with the soon-to-be profession that I'd be having, I should have a stable work to back it up.

Honestly, I previously told myself that I shouldn't broadcast it in social media that I would be taking the board exams so that the people I know wouldn't anticipate to look for my name on the passers' list, but you know, Papa told me that I shouldn't let myself fail, let alone imagine it. That's when I pushed myself to stop thinking of worst case scenarios, and I will not elaborate on that since it will lead me to imagining it. So yes, I will be seeing my name on the passers' list in my first take, I will be taking an oath soon, and that's all that I should be anticipating soon, and with that, there will be no room for contingencies and plan B.

Well, this will be the only social media account where I will be broadcasting that, and I hope I will keep my word. I will not be open about it in my other accounts, even Twitter, right after I post this.

But first of all, I would like to ask Him for the drive to study for the board exam that's already two friggin' months away because it's alarming that I haven't even done half of the preparations for it just yet.

So yes, I actually got all my "what nows" all figured out, but what's missing is the preparations that I should be doing right now which I honestly haven't done yet, because I still couldn't sink in everything, and I'm not yet ready to face the so-called real world.

Lord, when will I be ready? What will make me wake up from all the uncertainties and doubts that I have right now? Can You help me?

Writing this new chapter of my life is like already having ideas inside your head, but you can't write them just yet because you're still not confident with these ideas. Let's face it, this chapter ain't ordinary since we can't make drafts. Once it's written, the story will become a permanent part of your life, hence, there's no turning back to erase it, or edit it.

Well, I guess I don't have a reason to write anything just yet because this Holy Week is still an intermission to everything that's to come, but at least I already have something in mind.

Once again, I know it's kinda late for this blog of mine but here goes my greeting:

Congrats to us Batch 2016! :))))) Here's to a new chapter ahead.
May we pass our board/bar exams, and may we not be unemployed for too long.

We shouldn't just settle the goal for just passing, but instead, we should aim for the top!