A Forever Spent with You, or Not 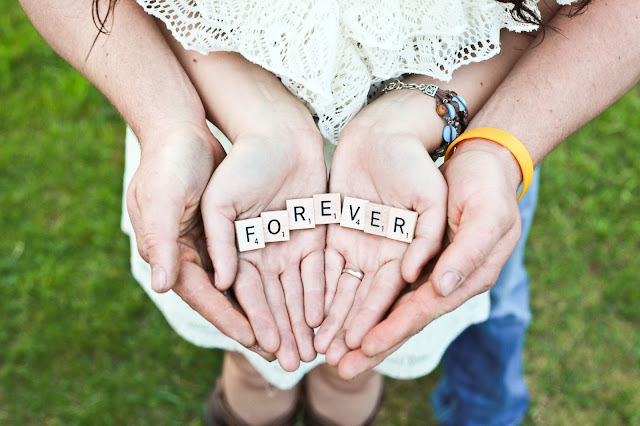 Our life is a cycle. One moment we're teenagers, and while we're at it, we'd be finding the one we'd be spending our whole life with until the end of time. Whether we like it or not, we're going to fall in love with someone we may or may not end up with. We may experience heartbreaks along the way, and they would say that it's just the way it is because we're just one step closer to our happy ever after. It just means that we weren't able to choose the right person to love. Admittedly we sometimes fail to foresee the possibility that that person may not be the one because we're so blinded by love.

You see, choosing that one person to spend your whole life with is never something that you can hastily decide on. Some would even pray, ask God for signs to be sure if that person is already the one. Sometimes we'd just go along with where we're destined to be, even though it's against our will. It may be against our will that the one we really want to have couldn't be ours, and we just have to deal with it and move on. I've been there and done that. I have liked and idolized a lot of guys, and wished they could be mine, but since I'm faced with the fact that I am not really allowed to have monogamous relationships yet while I'm still studying, I instead wished that someone like them could be mine in the future when the right time comes.

Everything was going smoothly in my life despite all those unrequited feelings that I felt, but then the time came when I'm already the one who's not returning them. I'm not really the type of person who would want to force myself to like someone back because I have my standards. I'm also not the type who would eventually like someone back when I know that he likes me unless he passes my standards. If I'm not attracted to you, then I'll never be attracted to you, unless I get to know you more and find a valuable trait in you that I've always wanted in a guy.

I would want to end up with a guy whom, at the very first impression, I know for sure that I'm going to want to spend forever with him. I want a guy whom I could really say, wow, there's really something about him that makes me wanna go crazy though I'm not sure what it is. I have actually found a guy like that, but it's too bad that again, he couldn't be mine, so I've moved on with no hurt feelings left within my system. Right now I'd just be admiring him from afar, looking forward to the time he goes online and like his posts. Haha. See how stress-free life would be if things go that way, though it could be a bit heartbreaking, that's okay.

You know, I was so wrong when I said that I'd rather be with the one who loves me rather than the one I love. I realized that it's supposed to be both, because why can't it be? Why should we even force ourselves to choose between these two difficult choices anyway? Why can't we just wait for that perfect moment where feelings would eventually be mutual? I'm sure God will give us that moment, and we shouldn't be allowed to force such.

It just upsets me that there are those who would think that it will be the end of the world if they don't end up with the one they love. I mean, there are many fishes in the sea. There are 7 billion people in the world, and just because that one person doesn't like you back doesn't mean that you'd be hopeless throughout your life already. If that person doesn't like you back, then you'll just have to accept that. There's always someone better. You don't have to be close-minded. Also, you could even say that it's his/her loss for not wanting to be with you because you're probably right. Someday you'd even be thankful that you didn't end up with that person because through him/her, you found your "forever".

The bottom line is that we just have to accept everything that comes to our life, whether we like it or not. If things don't go our way, there's always plan B. Also, I bet that somehow, some way, soon enough we would meet the one who would love us as much as we love them. Take it from me, because I'd swear to God that I will never marry until I find that kind of person.

Even though I personally do not believe in forever in a literal sense (because let's face it, there's this phenomenon we call "End of the World" or the marriage vow where we say "Till death do us part"), at least we could just feel like we're infinitely in love with the person that means the world to us.

So yes, I'll just end my disorganized thoughts right here. Till then. :*