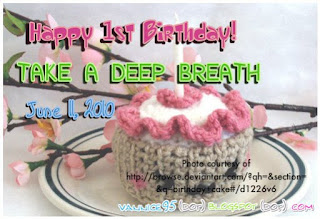 To celebrate this first anniversary of my blog, I changed my layout to this:

What do you think of my new layout? :) Me, I think it looks great! It's simpler and more attractive to me, I guess! :D

And, I'll also celebrate this first anniversary of my blog by posting this blog post, and telling you about how it came to be, and some experiences I had!

So, let me tell you the history of my blog! Here it goes!

One day, when I was looking through some updates on Friendster (Friendster was still popular when this blog has been born), I saw some bulletins. One bulletin post of Ate Pearl promoted her blog, http://stupify5.blogspot.com, which I recalled was newly updated. Yeah, I clicked the link of her website, then there! I fell in love with her new layout, and all the things that she had written! :D Because of that, I decided to make a blog too, so that I could also design a layout like that, and also, I could make an online diary. That time, I finally knew what formal blogging was about. I already had a blog before this, which was http://vannice.blog.friendster.com/! Take a look at my posts there if you want! hahaha.. :)) See? I don't really know about how to write in a blog! LOL! All I had written there were song lyrics, some shortcut-ed typing which are so immature, and others that you may observe! After browsing through Ate Pearl's blog, that time I knew how I should use a blog! :) Thank you for that! :D

Yeah, I made this blog on June 11, 2009. Whew! I wrote three (3) blog posts on that date! A welcome post, almost class opening, and summer '09 almost ending! See? I was just as excited that time for school! I think only really, really small things had changed on me. Hmm..I kept on visiting Ate Pearl's blog, so that I could observe more on how to use a blog.

Two days after that, I designed my first layout. Here's the post telling about it: http://vannice95.blogspot.com/2009/06/new-layout.html ! Too bad I didn't have the screenshot for the layout! So you see, my first blog title for this blog was "Story of My Life". Very simple isn't it? Next comes "It's my Life, It's now or never", then I think "Take a Deep Breath" was the next and it was the last blog title I could think of for this blog.

I tried and tried to make a blog header, but didn't push through because whenever I make one, it would be in bad quality, because I was just using Microsoft Paint and Microsoft Word. I haven't discovered Adobe Photoshop or Fotoflexer and Cooltext, so, yeah..haha.. :D

Well, I'll try to describe my layout! I tried and tried various Blogger base templates, and I came across Ms. Motto Blogger template. I had just tweaked the template, with my HTML coding skills (haha). I searched for various backgrounds on DollieCrave. So, I could describe my first designed layout as colorful, bright, cheerful, and all. But it isn't exactly as neat as this. :( So, because I was not contented, I kept on changing and changing, then switched from one Blogger template to another, tweaked them, and at last, I came across the Dots template. Still, I switched from the dark one to the light one, and tweaked it to my preference. I had joined MyLot that time, and I asked people there if my layout was OK. One criticized that it was rather "blase". So, I continued tweaking and all. Then, my continuous tweaking had finally stopped this December 26, 2009, when my longest-termed layout, for now, had been made. Here's the screenshot:

Yeah, it was the layout before this, just that the difference is the header, and the navigations! I still made some minor adjustments on this layout after that.

Another thing, or problem I encountered while making my layouts was how to make my navigations. Since Ate Pearl was the only one I knew who has this amazing feature on her blog, I asked her how to do her navigations! She gave me a link which I referred and followed how to do it, but still the result I wanted to show still didn't come up. I asked for more help from Ate Pearl, then she answered about reverting my XML template to the classic HTML template. I did not understand at first what direction could this tutorial bring me, but now I finally do..haha.. :D Since navigations like hers and mine are usually made in HTML templates, she advised me to revert to that. But because I found that it was harder to deal with it because I was new and worried about what could happen to my blog layout, I decided not to revert it. Hmm..looks like I kind'a regretted that decision, and at some times I don't! I regretted it because my "BLOG" navigation is the only one different from the other navigations because I could not find a way to link it like other navs. But now I don't regret having this XML layout anymore because I thought it was easier to deal with!

Back to the navigations, I was about to give up, but I never did. Because of that, I had finally done it! I was very happy and I was kind'a jumping with joy! First of all I thanked God, myself for not giving up too easily, and of course to my schoolmate and blogger-mate, Ate Pearl. I also thank my family too! :)

For the Plugboard, I saw it first from Ate Ayan. Hmm..I told her how I wished I could have one for promoting other's sites, then she told me that we could get it from a certain website! Then there! I finally got the Plugboard! Thank you so much! :D

For the Contact section, I just searched for it. And oh, I forgot to credit Kontactr for it! I'll add that to my credits later! :)

Well, enough for the layout! Let me tell you my experiences as a blogger!

There, I installed the Shoutmix box for the first time. People from all over the world came by and tagged on my shoutbox. One blogger dropped by and said, "link-ex?". I'm not really sure what to reply to her, so, err, I kind'a replied something about "link example"! LOL! :D I was really this new to this blogging thing. I'm not exactly sure how I knew what "link-ex?" meant, but I finally knew about it during the month of August, August 30, 2009 to be exact. After that, this started some daily traffic on my blog! I dropped by a lot of blogs and said, "link-ex?" or "care to link-ex?", and in return, some also dropped by my blog and invited me for link exchange. It was really fun! That's the time I met new friends! Some friends I recalled are Ate Rich, Ate Rose, Kuya Arvin, Kuya Jose, Kuya Julius, another Ate Rose, Ate Dyane, Ate Jhen, Deniece, Toni, Pat, Kuya Sendo, Ate Grace, and many others! Yeah, I really did meet a lot of friends! I thank you all for being such good friends to me! By being so understanding and all! You all have been there for me! Thank you very, very much! I hope we could be friends for a long time!

Being here in the blog-o-sphere, I also received some awards and tags! The first tag I received was from Ella! I was so happy that I got tagged for the first time! :D And, the first award I received was from Kuya Jose! Again, I was very happy. I was happy with these because I already had complete experience in the blogging world! It's good that these all happened before my blog turned one year! At least my time here is becoming a bit worth it! :) Thank you so much! :D Later after those, more tags and awards came! That made me even more happier!

While blogging, my parents that time were finding ways to earn money online. They had thought of making a blog, but since I already have one, they kept on suggesting me some websites that I should join, and some stuff that I should put on my blog! My father also has his blog, which he kept on updating (well, 'til 4 months ago), and since he wrote some really great and interesting posts, many visited and came across his blog! He had a lot of views, and online people daily! Well, you should check out his blog if you want! :)

We continued to find ways of earning money online. I tried Geostring, MyLot, Cashcrate, Triond, and many other sites. I did earn some money, but they're just too little to cash out, so, so far, I hadn't gotten my earned money yet.

I came across this Blogger friend, Dennis. He suggested me to get my own domain so that I could earn a lot of money like him. But I was so hesitant because I had observed other domains that they became expired and not working anymore, and some said that it was a hassle to renew it and pay for it and all. But as what this blogger friend had told me, some pros that we could get from domains are that some advertisers choose paid domains for advertising other than non-paid domains. This kind'a make sense, but what I worry about is that my blog could be in-danger, and would be gone, and that's the last thing I'd want to happen to my blog!

I thank my parents so much because they had been an avid fan of my blog, especially my mother who kept on reading every latest post I had and telling every single detail of it to my father! Thank you Mama and Papa! I also thank them for this Internet connection and laptop, support, and for making my life the way I wanted it to be! :D Without them, I could never exist!

Well, I think that's pretty much it I can say for my 1st-anniversary-of-my-blog post! Thanks for reading! :D

Thank you so much to all of you, especially God, family, and to my blogger friends!
By Nice Salcedo at 3:10:00 PM
Share:
Category: personal